The Texas Elf Owl, like all Elf Owls, is nocturnal. Unlike most raptors the Elf Owl has relatively weak feet, and its talons are not as good for catching prey. For this reason, Elf Owls usually feed on insects and scorpions. Some favorites include caterpillars, centipedes, cicadas, fly larvae, grasshoppers, locusts, and mantids. They have occasionally been known to eat mice, small snakes, and lizards, but this is unusual. 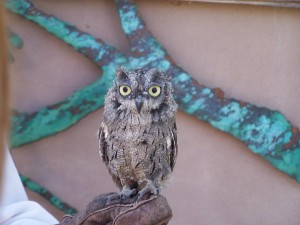 Elf Owls most commonly feed at dusk and at dawn.The Elf Owl is known for being fast. Because of their quick speed they are able to take most of their food in the air. This is a sight to behold! The Elf Owl is relatively non-aggressive when compared to other raptors. If they are approached, they will generally fly away, as opposed to fight. If they are captured, they have also been known to pretend to be dead.

When hunting, these owls are seen sitting erect with a “knock-kneed” posture. They will often sit, waiting for potential prey, on cacti, shrubs, and trees. If you do not see an Elf Owl, perhaps you will be lucky enough to hear one! They have several unique vocalizations. Calls include mating songs by males and females, warning signals, and hunger calls from nestlings.

The diminutive Elf Owl only measures five and a half inches at maturity. The Elf Owl has a grayish-brown plumage that is flecked with white on their bellies. Their faces have a more cinnamon tone and they have buff or cinnamon spotting on their foreheads as well. Similar 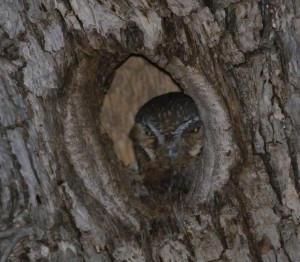 spotting is also seen on their wings.

For their size, Elf Owls have relatively long wings. Their backside plumage is brown, but it can range in its shades from orange to rust. They have round faces with pale yellow eyes. Their eyes are accentuated by the presence of small white marks that resemble eyebrows. Their beaks are gray overall, but the tip is lighter, often horn colored.

The Texas Elf Owl is seen southward into several areas of Mexico including Sonora, Guanajuato, and Puebla. Its range also extends north into Southeast California and to the east into Texas, as its name might imply. The first documented discovery of the Elf Owl was in 1861 by James Graham Cooper. The scientific name of the Elf Owl, “whitneyi”, comes from Josiah Dwight Whitney’s name.

Josiah Dwight Whitney was the founder of the Harvard School of Mining. Originally all Elf Owls were referred to as the Whitney’s Elf Owl, but today that name is reserved only for 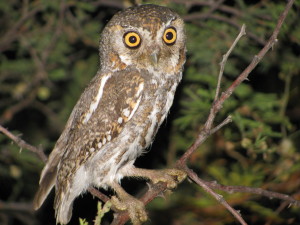 the nominate subspecies.
If you choose to feed scorpions in captivity, be sure to first remove the stinger before feeding them to any young Elf Owls.

The Elf Owl’s breeding season begins sometime in April. The male initiates breeding by calling out to females from within a cavity. If she approaches, he will pop out and begin singing to her. Females will then select a nesting site. Nesting sites are woodpecker holes created in cacti or trees. The female will lay an average of three eggs, and incubation will last for approximately 24 days. Males will often help the female with incubation.

Once the babies are hatched males will hunt for food. Once the food is given to the female she will feed the babies. After 28 to 33 days the young will be ready to leave the nest.