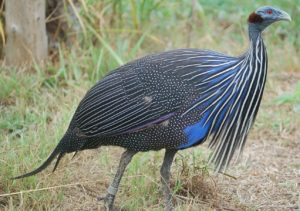 Vulturine Guinea Fowl are quite interesting to observe in the wild. They usually flock in groups containing between 20 and 50 birds. During the breeding season, flocks often disperse into mated pairs or small family groups.

Vulturine Guinea Fowl forage on the ground for insects or vegetative materials. Some flocks have been observed following monkeys that drop fruit onto the forest floor, which the fowl will eat. In captivity, they are normally very unassuming and have been known to accept food from their keepers’ hands. They are also quite curious and will investigate human activities in their areas.

Their calls sound like soft creaking or chirping noises. When distressed, Vulturine Guinea Fowl will produce a high-pitched screech. People who keep them in captivity tend to favor them because of their docile personalities and interesting traits. 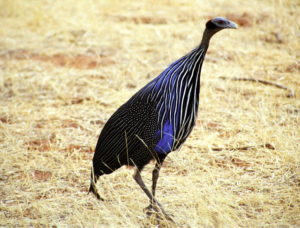 Though this species is not aggressive to humans they may show aggressive to other birds, including For this reason is important not to house this species too close together with other Vulturines or other birds. Vulturine guineas require large pens (min. 20×25 feet per pair) due to the fact that males can be quite aggressive towards females. Special high-up perches must be provided to give the hens a safe place to escape the aggressive behavior of the males.

Vulturine Guinea Fowl grow to about 24 inches (60 centimeters) in length. Predominantly black or very dark brown in color, Vulturine Guinea Fowl are speckled with white. Their heads have a soft patch of brownish downy feathers at the back, which gives them a “bald” appearance. The skin of their breasts is bright blue, though it is partially obscured by a line of long feathers marked with black and white stripes. Vulturine Guinea Fowl have red eyes. 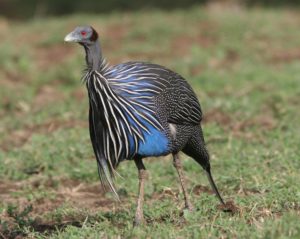 Native to the tropical regions of sub-Saharan eastern Africa, Vulturine Guinea Fowl are the largest members of their family. In the wild, thickets and scrubland at the edge of lowland forests is the preferred habitat for Vulturine Guinea Fowl. They are often raised in captivity. 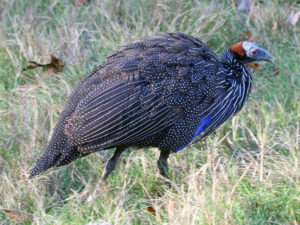 Although they may be sexually mature earlier, Vulturine Guinea Fowl normally do not lay eggs until they are about two years old. No sexual dimorphism is evident, and the birds must be observed for egg production or be DNA tested if you wish to sex them. To breed Vulturine Guinea Fowl, you should allow pairs to separate from the flock. Each pair may be offered a breeding pen that is about 200 feet square. The average clutch contains between 8 and 15 eggs.