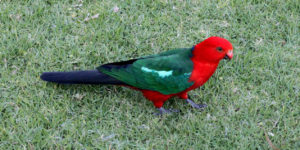 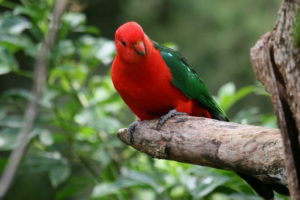 If you do this you MUST exercise your bird frequently and well. Australian King Parrots will thrive in outdoor, sheltered aviaries of about one and a half meters by five and a half meters by one and four fifths meters. As with all birds, a private nest box is essential for sleeping or hiding under moments of stress.

They need fresh water at all times and shelter from cold and wet weather. Because of their social, active nature, Australian King Parrots do well when kept in pairs and will tolerate Pheasants; Indian Ringnecks; Alexandrines; and Superb, Regent, Crimson-winged and Eclectus Parrots. Australian King Parrots should be offered a variety of fruits, legumes, and vegetables in addition to a basic seed mix and a variety of treats like nuts. They make adorable, playful friends who have eye-catching coloration.

Generally, growing to a length of about 425 millimeters, Australian King Parrots are colored by sex. Both sexes have striking coloration with many bright colors. Males have a bright red and orange coloration over their head, neck, and undersides. Their back and wings are a lovely bright green. The rump, tail, and lower back are all a contrasting blue and the nape sports a narrow blue band. The eyes are yellow.

Male Australian King Parrots have scarlet mandibles with black tips. Their legs and feet are gray, as they are in females also. The mandible in females matches the gray leg coloration. Female Australian King Parrots are much like the male in coloration except for their heads and upper tails, which are a dark green color. The throat and chest are a bit different as well. These are green in females and have red hints all along the upper throat area. The central tail feathers of both sexes are black. 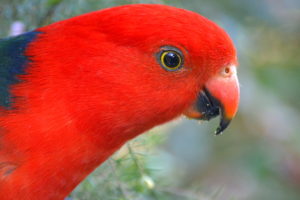 Australian King Parrots should be offered a variety of fruits, legumes, and vegetables in addition to a basic seed mix and a variety of treats like nuts. They need fresh water at all times and shelter from cold and wet weather. Australian King Parrots do not thrive in very small or confined or indoor cages. They will flourish in outdoor aviaries so long as they have plenty of shelter from the elements. 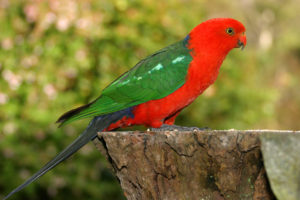 In return, the hen will accept his regurgitated food by bobbing her head and generally imitating his motions. Australian King Parrots’ clutches usually consist of three to five elliptical, slightly glossy eggs. The parents tend to be clumsy and often break the eggs. Tilting the nesting box will help them to avoid these accidents. The eggs incubate for around 20 days, and the male attends his hen for the duration although she does the entire sitting. Australian King Parrots fledge at around 35 days and the cock will help raise the young and teach them to fly. 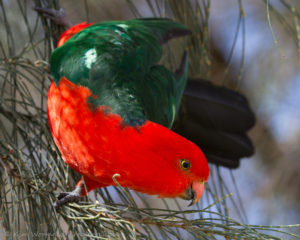 Immature Australian King Parrots resemble the females in coloration until six months of age. At this point, the males’ heads will begin to turn red and adult plumage will be acquired at around 16 months. It will be another 14 months before he is fully colored and he will not mate until he is around three years old. Female Australian King Parrots may be sexually mature at one year of age. Immature Parrots will flock together over the winter months.