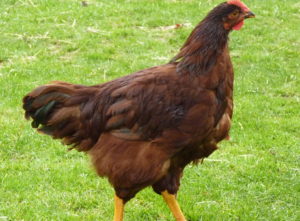 The Rhode Island Red is an excellent choice for a farming chicken and for the small flock owner. It is a very sturdy and hardy bird, and does well even in marginal conditions. They are mostly known for their ability to lay eggs. They can be used for their meat also, and are one of the most successful dual-purpose chickens. In a twelve-month period, they can lay 200 to 300 eggs. They are no longer used commercially, but are still very popular in breeding programs. Some of the males are quite aggressive and don’t get along with others. Some of the chickens are known for broodiness, but that can be modified with breeding. 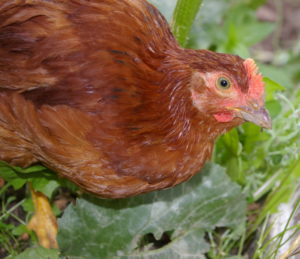 Due to the mixed ancestry of the Rhode Island Reds, they have been seen with single and rose combs, and some have pea combs. The chickens with the rose combs tend to be smaller, but they should be the same size as the single combed chickens. The cocks weigh around eight 1/2 pounds, the hens weigh six 1/2 pounds, the cockerels weigh around seven 1/2 pounds and the pullets weigh five 1/2 pounds.

The chickens have a yellow skin and lay brown eggs. They have horizontal, or rectangle shaped bodies, that tend to be long and oblong. They are dark red in color generally. Black in the main tail and wing feathers of the chicken is normal. Although their color can range from tawny red to dark and deep red, it just depends on how well the breed was maintained. Some breeders have tried to make the chickens better egg layers, and by doing that, have sacrificed their deep and rich color. They also made the chicken smaller and took away the broodiness. 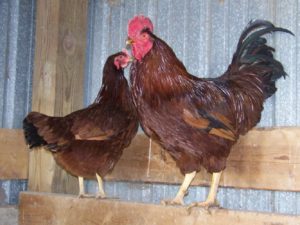 The chicken was thought to have come from when Columbus came on his second voyage in 1493. All chickens were thought to have descended from the GaHusbankiva, a red jungle fowl from the East, like in Asia. The Rhode Island Red developed in the section of New England in Narrangansett Bay and Buzzard’s Bay. In the 1840’s and 1850’s, the chickens began to be imported on a regular basis, and became a popular breed.

It was made from crossing the Red Malay Game, Leghorn and Asiatic stock. The Rhode Island Red got its coloring from the Red Malay Game. These chickens were bred primarily for the market purposes and used because of their ability to produce eggs. The breeders have modified them and therefore, the original bloodlines and heritage are becoming lost. There are an estimated 5000 Rhode Island Chickens left, and the breed is on the watch list of the Conservancy. 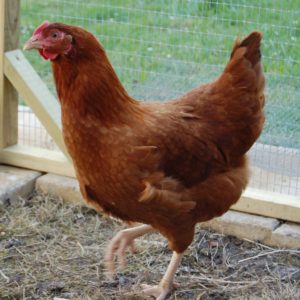 Breeders, again, should not take the undersized chickens to breed from. Also, the chickens with black feathers in their body should not be chosen to be bred. The medium and brick colored hens should also be avoided when breeding because they don’t keep with the characteristics of the breed.