The Jersey Giant is a fowl extremely appreciated and used especially for the heavy meat and excellent egg laying abilities.

Unlike other chicken breeds, the Jersey Giant is not a quick grower, taking about six months until they become well developed and have a fair quantity of meat. Their rather big size is a disadvantage when considering brooding and incubation, so it is best to avoid these activities for the Jersey Giant.

The name of this breed is also a clue for their large size, with the cocks reaching up to 6 kilos in weight, cockerels going up to only 5, hens usually weighing no more than 4.5 kilos and the pullets reaching a maximum of 4 kilos. The Jersey Giant is known to be the largest of the American Class breeds. 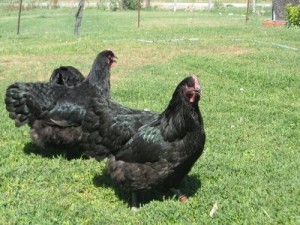 Coming in three different varieties – black, blue and white, the Jersey Giant has a yellow skin and lays darker brown eggs. Angular and rugged in shape, these birds have a single comb and the blue variety is considered the most beautiful of all three.

The Jersey Giant breed was developed by the Black brothers in the second half of the nineteenth century. Borrowing the name of their initial creators, this breed was first called the Jersey Black Giant and has as ancestors other breeds that were mixed, such as the Dark Brahmas, Orpingtons, Black Langshans and Black Javas. There are also some Cornish breed genes in the original bloodline of the Jersey Giant, which, even nowadays, remains the biggest chicken bred in the entire America.