The song of the Spanish Timbrado Canary consists of twelve notes. Their songs are said to be bright, harmonious, and metallic sounding. Although their songs are loud, they are not rasping or strident, and consist of many quick successions of combinations of the range of notes. Spanish Timbrado Canaries can be taught to sing on cue! They enjoy bathing and, though often kept indoors, they can be kept outside so long as the temperatures are warm.

Most Spanish Timbrado Canaries grow to just over five inches in length. They usually have tight feathering that is greenish with a gray tint. Yellow, white, variegated, and cinnamon colorings are also available. Most have “fish tail” shaped tails, rather than the “pipe stem tail” type, that many canaries have, and rather short legs. 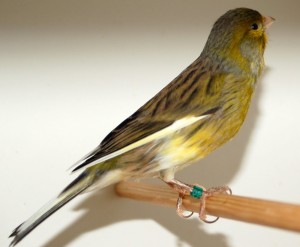 The name Timbrado derives from the timbre of the canary’s metallic voice, reminiscent of castanets, the traditional instruments used in much of Spain’s folk music.
Spanish Timbrado Canaries may be kept outside so long as temperatures do not fall below 32 degrees Fahrenheit (0 degrees Celsius) and they are well sheltered from the elements.